Rhizomatiks Co., Ltd. and Evixar Inc., both based in Tokyo, have jointly developed the “Home Sync Light” device for enjoying live streaming at home with lights synchronized with live performance. The two companies tested the device during the special performance at “P.O.P (Perfume Online Present) Festival” held on Monday, September 21 (a public holiday). 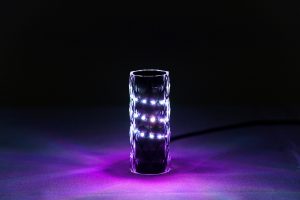 Conventionally, wireless-based wearable LED devices have been used in live entertainment production. Although more people are currently watching live performances with streaming at home due to the COVID-19 pandemic that restricts live events with a large crowd, having those LED devices synced up with live performance for home use puts a considerable burden on users and restricts a viewing environment. It usually needs device configuration and app installment on smartphones for syncing, or a specific web page to watch the streaming.

Home Sync Light makes use of acoustic communication “Another Track (R)” developed by Evixar to sync through sound on the device alone. Users just need to turn on their device and put it where they can hear the streaming sound for the LED to automatically start flashing in sync with the music. In addition, synchronization takes only about one second even if the user starts watching the streaming from halfway through. Furthermore, the streaming platform is not restricted since no dedicated smartphone apps or special web pages are required for device communication. Acoustic communication allows users to enjoy exactly the same light as at the venue even on live streaming when the actual live performance is carried out simultaneously with online streaming after the pandemic, providing an enhanced sense of unity. 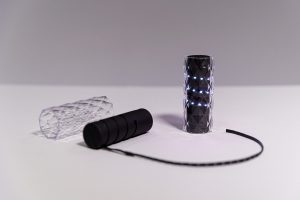 Although this device was designed with LED strips wrapping around a cylindrical body, it can be enjoyed in many different ways at home by, for example, standing the device as it is as a light stand or stretching it out and arranging it around the monitor. It can also be created with an original body in a completely new design without having to change the internal circuit configuration.

During demo experiments, live streaming distributed through ABEMA, niconico Live, U-NEXT, and LINE LIVE-VIEWING were viewed at about 80 locations in Japan under different networking conditions, confirming that synchronization was perfect and that the device greatly improves the immersivity of live streaming.

In the future, Rhizomatiks and Evixar plan to expand this device into concert goods and for event production, and, therefore, they are currently looking for business partners.

The companies have upgraded the version of acoustic communication “Another Track (R)” to suit the era of the new normal. Previously, it could only be used with streaming services that can be used for high-frequency bands, but the new upgraded version has eliminated such restrictions, allowing acoustic communication for all distribution services.
The new Another Track (R) is compatible with the compression and range cuts carried out during streaming, and also simultaneous streaming to multiple channels such as TV and multiple online streaming services. Moreover, since it can be provided as a VST plug-in for signal generation at the transmitting side, it can also be used for online streaming in OBS Studio. The receiving side supports not only module boards but also library formats compatible with smartphone apps.

The P.O.P (Perfume Online Present) Festival, held as the fourth part of Perfume’s anniversary year closing project “Perfume 15th & 20th anniversary with you all,” is Perfume’s first online festival. It was held on September 21, 2020, to celebrate the group’s 15th debut anniversary and 20th anniversary of its formation.
→ https://perfume-popfes.jp/

Established in 2006, Rhizomatiks is a creative company that has a cross-disciplinary membership ranging from various backgrounds such as media art, data art, engineering, interface design, product design, architecture, visual, music, etc. We are constantly creating new formats beyond the existing framework.
→ https://rhizomatiks.com/en

Established in 2004, Evixar developed the automatic content recognition technology Evixar ACR and acoustic communication technology Another Track(R) ahead of other companies in 2008, in anticipation of a surge in digital streaming content. These technologies are currently being applied to fields such as television, radio, movies, theatrical performances, sports, live entertainment, and disaster prevention. In 2017, Evixar won the Tokyo Venture Technology Excellence Award. We aim to establish “barrier-free screening using the smartphone app HELLO! MOVIE” and “subtitled spectacles” as industry standards in the world of movies.